ERA CoBioTech is an ERA-Net Cofund Action under H2020 Grant agreement No. 722361

Multiple levels of strain engineering and synthetic biology will be implemented to create green-cell factories with enhanced carbon flow from CO2 to terpenoids. Various strategies will be combined to produce novel diterpenoid products with high potential for a broad range of applications. Optimized strains will be grown to scale and processes for diterpene product extraction will be designed.

Twenty carbon containing (C20) diterpenes are complex, often oxyfunctionalized secondary metabolites found largely in plants. Their variety and complexity have made them highly interesting for numerous applications as medicines, antimicrobial agents, and high-value chemicals. The complex structures of diterpenoids are difficult and costly to chemically synthesize and can be expensive or inefficient to purify from their native host organisms.

All organisms produce the same 5-carbon building blocks used in terpenoid production pathways. Heterologous expression of modular terpene synthase pathways can be used to produce non-native terpenoids in engineered hosts. Production of terpenoid products in fermentative hosts has become a mature technology, however, relies on unsustainable use of organic carbon sources such as glucose and inherently competes for agricultural resources. Fermentative microbial hosts are additionally not optimized for the production of the C20 diterpenoid precursor geranylgeranyl pyrophosphate (GGPP).

Microalgae are naturally optimized to produce GGPP as the precursor for light harvesting and photoprotective pigments in the cell. Over-expression of diterpene synthases (DiTPS) allows the conversion of this precursor into the numerous carbon skeletons of diterpenoid products. Algal cells also represent ideal chassis for the expression of cytochrome P450 monooxygenases (CYPs), which are needed for oxyfunctionalization of diterpene backbones to specialized structures. In photosynthetic cells, CYPs can be coupled to photosynthetic electron transport chains for efficient redox potential, an otherwise limiting factor in non-photosynthetic hosts.

Combination of DiTPS and CYPs in an algal chloroplast is the ideal chassis for complex oxyfunctionalized diterpenoid production, where both high concentrations of precursor and the redox electron flow are abundant. Algae hold the additional benefit of rapid growth rates in simple mineral salt solutions using only light and CO2 as energy and carbon inputs, respectively. These organisms are ideal hosts for the production of diterpenes and are inherently sustainable production chassis.

To date, engineering of microalgae for robust expression of transgenes has been a major limiting factor to their widespread application as green-cell factories for complex biotechnological targets. Through combined efforts of strain domestication and synthetic biology, the development of synthetic eukaryotic algal transgenes have recently been demonstrated to facilitate advanced engineering of these highly promising organisms.

The project is divided into four work packages (WP1-4). 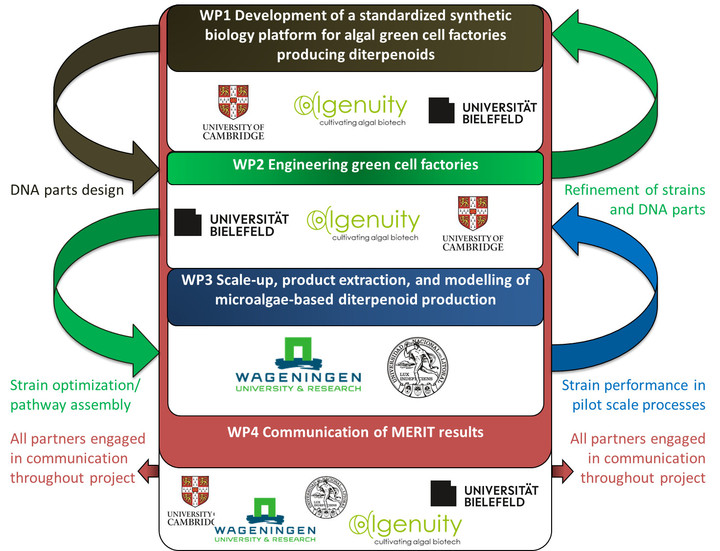 Aim: To develop robust synthetic biology platforms for C. reinhardtii and P. tricornutum by establishing versatile kits of standard parts with verified characteristics, recorded in a digital registry, as well as optimized workflows.

Aim: To develop processes for production and in situ extraction of diterpenoids from microalgae and to validate the process in an industrially-relevant environment. Results are integrated into LCAs and techno-economic models aiming at the identification of technological and economic bottlenecks for commercial scale processes as well as to assess its sustainability.

Aim: Communication activities within MERIT aim at increasing the stakeholder`s awareness for the great innovation potential of microalgae as green cell factories, which should foster the development of a sustainable European bio-based economy by including microalgae as production hosts.