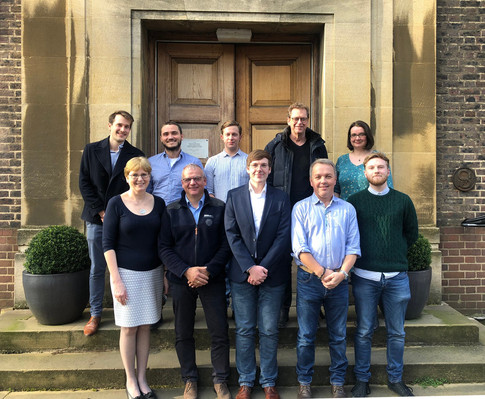 The MERIT consortium conducted its first general assembly from 20th to 21st March 2019, eight months after the official project start. Kindly hosted by Prof. Alison Smith, the collaboration partners were invited to the historic campus of the Department of Plant Sciences at Cambridge University to present the scientific progress and technical achievements.

Representatives from each work package presented progress reports, which were then intensely discussed, fostering the close cooperation of the project partners. In this context, the WP1 partners announced the release of their standardized microalgal expression toolkits, registered at the benchling server, as a first major achievement.

In addition to the discussions, the project partners also used the opportunity to visit the Algenuity production facility in Stewartby and the plant growth facility at the Department of Plant Sciences in Cambridge Botanic Garden. Both locations will soon be used within the MERIT project to enable the efficient cultivation of engineered production hosts under controlled environmental conditions.

The next assembly meeting was scheduled to take place in November 2019.

back to news overview